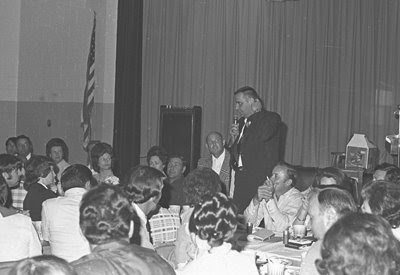 74 0313 01
March 13, 1974
Bert Lance, former OMB director for the Carter administration, was special guest at the annual McNair Bird Supper. Among other achievements, Lance is accredited to having originated the quotation: "If it ain't broke, don't fix it."
Wikipedia says:
"This expression has been popularized from the idea that any attempt to improve on a system that already works well is pointless, and may even be detrimental. Reportedly it originated in the United States in the 20th century from Bert Lance who, as a government official, was quoted in May 1977 issue of Nation's Business as saying, "If it ain't broke don't fix it." Lance's advice, according to William Safire, "has become a source of inspiration to anti-activists."