My first photo in Vietnam 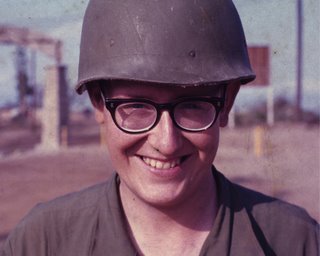 Posted by BillRicksofSoperton at 10:43 PM No comments:

What a Difference an Election Makes

Maybe nothing has really changed, but the media reports are different. The president seems to be taking some different approaches. In religious reportings there is more of a focus on people taking care of people, rather than trying to straighten each other out.

Even before the election I was noticing that some churches were taking care of people without ignoring the need to be moral.

I'm gratified that the election showed that the majority of the people were not as extreme as we were led to believe.

I hope that 2007 will be a year when people came together to resolve problems for all of America and the world. That we can focus the things we have in common, rather than those things that divide us. I hope we will all be brothers and sisters, all children of God.
Posted by BillRicksofSoperton at 9:58 PM No comments:

Learning more about American nuclear power. A million military veterans have been exposed to ionizing radiation. Some in the atmosphere experiments, some underground at the Nevada Test Site, some on nuclear submarines, some in the areas of nuclear warheads, and even today in Iraq where our military servants are exposed to depleted uranium.
American is guilty of ignorance and apathy where the Atomic Veteran is concerned. Records have been buried. Claims are unheard and unresolved.
The VA accepts some radiation-caused illnesses as presumptive. Mostly those in which the cancers are so severe that the patient will be dead in a few years, so compensation may be less than $100,000. Other radiation-induced illnesses are not considered pre-sumptive, although the radiation is the same, and the health effects are similar. Radiation attacks the body at the cellular level. One person gets lymphoma; another gets polycystic kidney disease. The PKD patient may live longer with dialysis or a kidney transplant, but health is impaired for the rest of his life. PKD causes high blood pressure, coronary disease, heart attacks and strokes.
Does the VA treat every case the same? What do you think?

Framed prints are more impressive than unframed prints. Matting improves appearance, too.
Digital imaging is great! I appreciate the days I spent in the land of "The Great Yellow Father"! I wish that there were nearby schools to cut through the tape and nonsense. Thank you, RIT for what you did for me, but I don't want to spend another winter in snow country.
Posted by BillRicksofSoperton at 11:10 PM No comments:

Sign for today:
SAVE GAS SHOP SOPERTON WE HAVE A LOT TO OFFER

Another adjustment on the RHW. Looks great framed!

Lots of irons in the VA fire, but there is time. VFW CMDR suggested Service Officer, but gotta write CGB first.

Prayers for the hopeful, the sad, the desperate, and all Pharisees everywhere that they will see the light.
Posted by BillRicksofSoperton at 10:52 PM No comments:

The Sign: TO HERSHAL HALL. NEED MONEY BY FRIDAY TO GO CHRISTMAS SHOPPING.
Other Side: GIVE THANKS TO GOD FOR ALL YOU GOT.

Good News: I've finally located the Army buddy who shared the radiation zone with me. He lives out west. Doesn't have a listed phone, so hard to find. The VFW in his city knows him and will get in touch. It has cost a lot of time and phone calls to find everybody in the U. S. with his name. He has health problems, and I hope they'll find him feeling well.

More good news: I've been learning a lot this year on my Coolscan V by Nikon and the Epson 1800 Printer. It has been long and tedious, but today I got the photo of RHW at Sterling Mill-1973 turning out exactly I wanted. It wasn't easy, but the results are amazing.

Those are two of the things I got. I do give thanks to God.
Posted by BillRicksofSoperton at 10:02 PM No comments:

The layout is finished and I'm at home having a sandwich.

For the past few days my mind has been on Carolyn Jordan and her family. Her death was unexpected for all except family and a few close friends. She was a good friend and a good journalist. For over three decades she reported on her home county. Indeed, she recorded the history as it was happening.
I'm learning more about blogging. Blogger has great helps.

It's cold and very windy.
Posted by BillRicksofSoperton at 2:33 PM No comments:

Getting started? I'm not sure I even want to get started. Computers intimidate me. Even worse, people intimidate me.
But other people blog. Is it all that different from e-mailing?
Okay, I'll give it a try.
Posted by BillRicksofSoperton at 2:25 PM No comments: