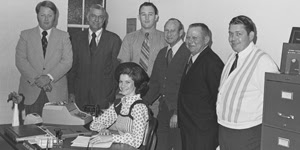 Hugh Ricks (left) was sworn in as a new City Councilman. L-r: Mayor Frank Radford, Councilmen Glenn Wilcher, Jack Pournelle, Elvin Young, and James Monroe (Crow) Moxley. Seated: City Clerk Becky Hooks. Photographed in the old City Hall on First Street (MLK Drive) before the railroad depot was renovated in September 1973. Councilman Moxley, after a long absence, was sworn again January 3, 2008. He is the only of the elected official in the picture who is currently serving. City Clerk Hooks continues on her job.

Other photos that week: Individual photo of Ricks's swearing in, individual photos of county officers being sworn in, Young Farmers organization newly organized, basketball photos.
Posted by BillRicksofSoperton at 11:09 PM