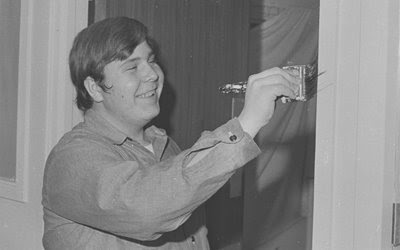 74 0102 01
January 2, 1974
A smiling Chuck Ellington completed his service project of some interior painting at the hospital. He received his Eagle Scout badge later in 1974. (In 2009, he is conty school superintendent.)

AS WE START A NEW YEAR, WE RECALL EARLY 2008, WHEN WITH AMBITION WE LAUNCHED A 35 YEAR PHOTO FEATURE. AFTER TWO WEEKS, ALL THE BLOGGING CAME TO AN END. PANCREATITIS AND PSEUDOCYSTS CAUSED AN EXTENDED HOSPITALIZATION. IN LATE SPRING WE BEGAN CATCHING UP ON THE 1978 PHOTOS, BUT NOT THE 1973 PIX.

NOW WE TRY AGAIN, CONTINUING 30 YEARS AND RESUMING 35 YEARS. JUST LOOK FOR THE DATES IN THE TITLES.
Posted by BillRicksofSoperton at 3:10 PM