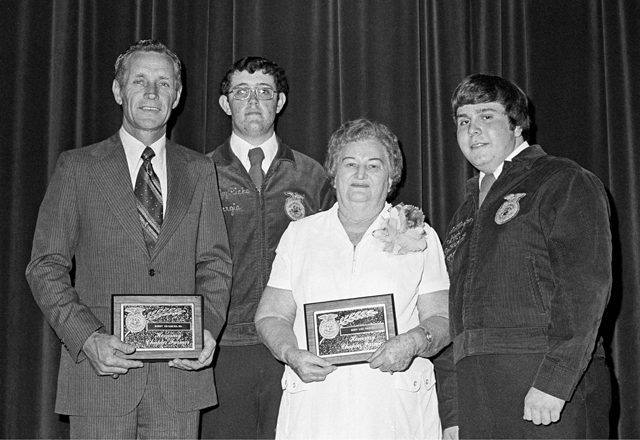 At the FFA Banquet, Superintendent Bobby Driggers and Lunchroom Chief Mary Lou Davis were recognized as Honorary Chapter Farmers by Brantley Ricks and Chuck Ellington. When we were in high school "Ma" Davis would sneak a few peanut butter cookies out the back door. While performing newspaper duties at TES I would stop by the lunchroom, where she would have saved back a few cookies for me. They were huge. One of the reasons during the 1980s I got up to 192 pounds.

William A. Ricks
http://billricksofsoperton.blogspot.com
Thanks for subscribing to  'Bill Ricks of Soperton'
Photo files at http://picasaweb.google.com/W.A.Ricks/
Posted by BillRicksofSoperton at 5:19 PM

I remember Miss Davis when I was in school. My grandfather, Edward Geiger, served on the BOE with Bobby Driggers, and they were good friends.

Is this him, Chuck?