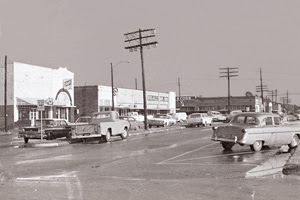 This shot was made in 1970, I think, maybe 1969. I mislaid the negative after scanning, so I can't be sure. But it does look like it was made with my 28 mm wideangle on my Asahi Pentax Spotmatic that I bought the first week I was in Vietnam.
I was standing in front of the old railroad depot that was later converted into the City Hall. It was after a rain; the sun was out. The scene was dramatic. The negative was attacked with mildew, leaving distracting splotches on the clear sky. I used some unharmed areas and cloned them over the entire sky area, very painstakingly. It was a few hours work, but it looks pretty good.
Notice the old cars. The newest one is the Mustang, just the other side of the 1954 Ford. Mustang started in 1965.
Posted by BillRicksofSoperton at 11:14 PM