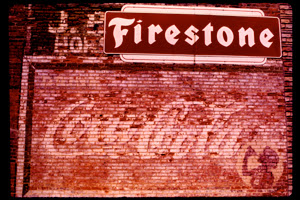 The color slide was made in 1970. I played around with the density, contrast, and saturation. The location was also the site of Soperton's first fire station --- a shed of corrugated metal, covering the hose wagon, a few of those pointed-bottom buckets and a few other items. In my child's mind I believed that the store was named Firestone because it was the Firestation. The building once housed Fisher and Lowrey's mule business. Maybe one day when I'm in a better writing mode, I will say more about the great couple who gave Soperton one of its best businesses.

Now, a collection of fun stuff:

RULES OF THE SOUTH
The "Opener" refers to the first day of deer season or dove season. Both are holidays. You can get pancakes, cane syrup, and sausage before daylight at the church on either day.

So every person in every pickup waves? Yeah, it's called being friendly. Understand the concept?


NORTH & SOUTH
If there is the prediction of the slightest chance of even the smallest accumulation of snow, your presence is required at the local grocery store.It doesn't matter whether you need anything or not. You just have to go there.

Do not be surprised to find that 10-year olds own their own shotguns, they are proficient marksmen, and their mammas taught them how to aim.

NOTES ABOUT GEORGIA
You describe the first cool snap (below 70 degrees) as good pinto-bean weather.

You only own four spices: salt, pepper, Tabasco and ketchup.

ATLANTA
I-285, the loop that encircles Atlanta, which has a posted speed limit of 55 mph (but you have to maintain 80 mph just to keep from getting run over), is known to truckers as "The Watermelon 500."

Don't believe the directional markers on highways: I-285 is marked East and West but you may be going North or South. The locals identify the direction by referring to the "Inner Loop" and the "Outer Loop."

REMEMBER WHEN
Laundry detergent had free glasses, dishes or towels hidden inside the box?

It was considered a great privilege to be taken out to dinner at a real restaurant with your parents?

REARRANGED LETTERS
ELEVEN PLUS TWO
When you rearrange the letters: TWELVE PLUS ONE

DESPERATION
When you rearrange the letters: A ROPE ENDS IT

SOUTHERN JOKES
A group of Alabama friends went deer hunting and paired off in twos for the day. That night, one of the hunters returned alone, staggering under the weight o f an eight-point buck.
"Where's Henry?" the others asked..
" Henry had a stroke of some kind. He's a couple of miles back up the trail," the successful hunter replied.
"You left Henry laying out there and carried the Deer back?" they inquired.
" A tough call," nodded the hunter. "But I figured no one is going to steal Henry!"