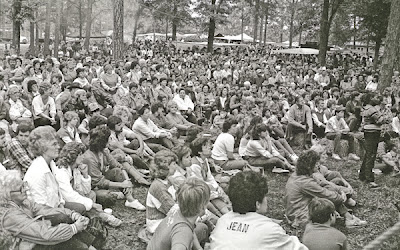 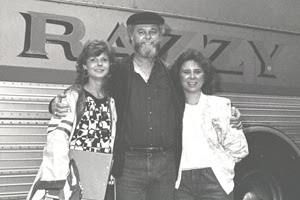 Were you in the crowd? It was the worst weather in the history of the Million Pines Festival. (Actually it rained during the festival weekend three years in a row, one of them enough to collect $10,000 in rain insurance.) In 1986 the leaders took a big chance paying $5,000 for a top entertainer to appear.

It flooded all day Friday, the day before the festival. George McLeod and Chester Kight were called on for every bale of hay they could haul to cover the soupy mud. During the night the rain stopped and it turned cold --- very cold! At 2 a.m. James Windsor and I were still working at the park putting up the green and gold entrance flags. Jeanne McLendon worked in the rain and cold, smilingly mothering every exhibitor's need.

Teddy Holton had arranged the entertainment, including the star performer. Thousands of dollars were spent in promotion to tell the entire region that Razzy was coming and Bugs Bunny and friends would be coming down from Six Flags for the weekend.

Bobby Cammack managed ticket sales in the secure, weather-proof gazebo built by Gene Pullen, who with his brother, Ralph of McRae, were the roving ambassadors of good will who visted every town, spreading posters, brochures, bank inserts for weeks ahead of the festival.

Everything paid off. Paid attendance in the awful weather was greater than previous festivals with sunshine. What could have been a major disaster turned into a day of salvation for the festival. We didn't buy any fire trucks that year, but the festival continued. And look at all those chilly, happy faces!