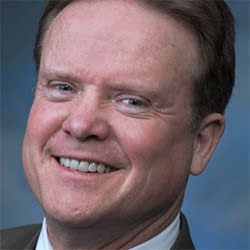 Why would a decorated Vietnam Veteran stand in the way of his fellow veterans receiving compensation for illnesses related to Agent Orange?
Last October the VA Secretary announced a determination that three other diseases should be added to the presumptive list for Agent Orange.  Some Vietnam Veterans would be receiving compensation today except for the intervention or interference of one U. S. Senator from Virginia named Jim Webb.
Someone suggested that 64-year-old Webb is not your typical Vietnam "grunt".  Like everybody else, I took the easy route of reading his Wikipedia biography.
He grew up in a military family, his father being an Air Force pilot.  They moved around a lot, and he attended more than a dozen schools. He attended USC on a ROTC scholarship starting in 1963. He graduated from the Naval Academy in 1968 and by 1969 he was in Vietnam as a Marine officer. He received the Navy Cross for heroism as a Platoon Commander in a search and destroy operation, described in the Wikipedia article.
After service he went to Georgetown and got his law degree. Climbing the Washington ladder, he became the first Naval Academy grad to serve as Secretary of the Navy. He opposed the expansion of women's roles in the Navy.
He criticized Kerry and Bush in 2004. He is a prolific writer and he wrote that Bush "committed the greatest strategic blunder in modern memory.  He endorsed Charles Robb over his Academy classmate Oliver North for Senate (1994). He endorsed George Allen over Robb in 2000. Then ran against Allen in 2006 and won.
That was when Allen uttered the "macaca" quote. Webb's margin of victory was less than 10,000 votes, but Allen didn't demand a recount.
Wiki also records his confrontation with Bush about Webb's son.
From being the son of a "lifer" to an accomplished writer of fiction, non-fiction, movie scripts, and more, the Reagan Democrat still mystifies friends and enemies in his current role as a U. S. Senator.
You simply must go to Wiki and enjoy Jim Webb: http://en.wikipedia.org/wiki/Jim_Webb
Also go to Veterans Today and read the June 10 article: http://www.veteranstoday.com/2010/06/12/tell-sen-webb-support-declaring-presumptive-agent-orangedioxin-service-connected-disability-compensation/
How can a "tax and spend" Democrat become a "fiscally conservative" Republican?  How can a Vietnam Veteran turn against other Vietnam Veterans?
What an enigma!
William A. Ricks
http://billricksofsoperton.blogspot.com
Be sure to subscribe for daily email delivery of 'Bill Ricks of Soperton'
Posted by BillRicksofSoperton at 10:02 PM

Jim Webb is a complex, but principled man. Read The Nightingail's Song, by Robert Timberg to get a better feel for the man. His distain of Oliver North dates from his days at the Naval Academy.

I admit I was very excited at first when he got elected, but he hasn't pushed as hard as I thought he would when he got in there.

I must admit, I don't understand why he would be blocking VA benefits after knowing about his own experiences in Vietnam...